Hey! Listen! This post is part of a series on the Ubiquiti EdgeRouter Lite. Check them all out!

For years, I’ve been using and loving my Ubiquiti EdgeRouter Lite. For about $100, you’re not going to find a router with more features. In fact, most of Ubiquiti’s offerings are a very good value for the money. However, in the past year or so, Ubiquiti has seemed to have some issues with what direction they want to take as a company:

It seems that Ubiquiti is throwing shit at a wall and seeing what sticks. Don’t get me wrong, I’d still recommend the EdgeRouter line to anyone who is currently using a router from BestBuy. However, I was growing tired and nervous of Ubiquiti’s decision making, so I resolved to replace my EdgeRouter with something slightly more stable and focused.

In terms of raw power, the EdgeRouter Lite is only a 500Mhz dual core MIPS CPU with 512MB of DDR2 RAM, so the bar was set pretty low. I knew I was going to be looking for a mini-PC form-factor, and only had a few requirements:

With that said, below are the devices that I came up with in my search.

I have a relatively simple setup at home, so my requirements for a router OS were simple:

I considered Untangle NG Firewall, Sophos UTM Home Edition, Sophos XG Firewall Home Edition, ZeroShell, IPFire, ClearOS Community Edition, Smoothwall Express, and Endian, but chose not to pursue them because they were either proprietary, had limited functionality, or were abandoned completely. In the end, I narrowed my search down to pfSense, OPNsense, and VyOS.

At first, I considered using the Shuttle DS77U with VyOS. However, VyOS is really made for advanced routing, which is not what I needed. Then, I thought about still using the DS77U, but with pfSense. However, I really wanted to support the pfSense project by purchasing from Netgate, and in my price range, my only option was the SG-1100. Even though x86 hardware arguably has more raw power than ARM hardware, the SG-1100 is no slouch. The ARM hardware is very specialized and can route at full gigabit (as seen by Lawrence Systems) and it has received some really great Reddit reviews. 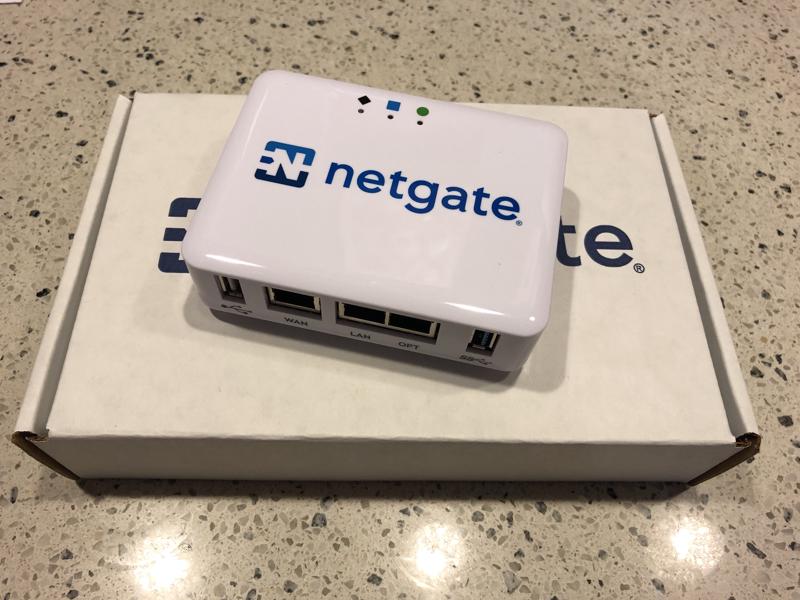 Having never used pfSense before, I spent the first few minutes poking around in the web interface. The web GUI is snappy, and the device doesn’t seem to run too hot. 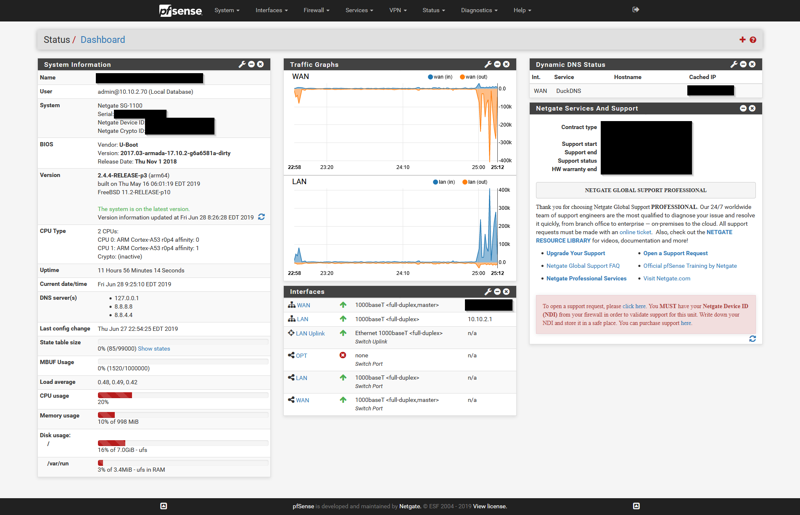 I then shutdown all of my servers/devices, swapped out the routers, and powered up the SG-1100. To no one’s surprise, the SG-1100 booted up flawlessly and started handing out IP addresses.

Obviously pfSense is going to be different than EdgeOS, but in the first day or two, a few things stuck out immediately.

Both pfSense and EdgeOS can route gigabit, and both are able to utilize my 400/400Mbps FiOS internet connection. Running the command below to download 500Mb test file, I’m able to max out my connection with both routers, so I have no complaints there.

I’ll spend the next few days tweaking all my pfSense settings, and then working on getting logging setup to push pfSense firewall logs to Graylog. Until then, I’m a happy SG-1100 and pfSense user!