Hey! Listen! This post is part of a series on my journey into K3s. Check them all out!

In my last post, I setup a K3s single-node cluster and an example application. While everything was done through the command-line, as a noob, it’s nice to have a graphical user interface (GUI) of some kind. I’m not a fan of ClickOps, but it’s convenient to have a GUI to be able to quickly view status, instead of hunting for the right kubectl command.

There are a ton of k8s GUIs, but I’m going to be covering what I’ve found to be the easiest to setup and use.

Because K3s is upstream k8s (with some bits stripped out), we can setup the official k8s web dashboard.

Next, we need to create a user and role to login to the dashboard. I recommend storing all of your manifests in a directory for easy management and version control. You can copy/paste the commands below to create the directory and the manifest.

Now, apply the manifest and get your token.

By default, the web dashboard is only accessible from within the cluster, which isn’t particularly useful because we’re on a separate machine. We need to open a second terminal on our personal machine and run kubectl proxy, which will open a proxy to the K3s cluster. With kubectl proxy still running in the background, click on the link below.

You’ll be prompted to enter your token.

Finally, you’ll see the dashboard. Click around to explore your setup. 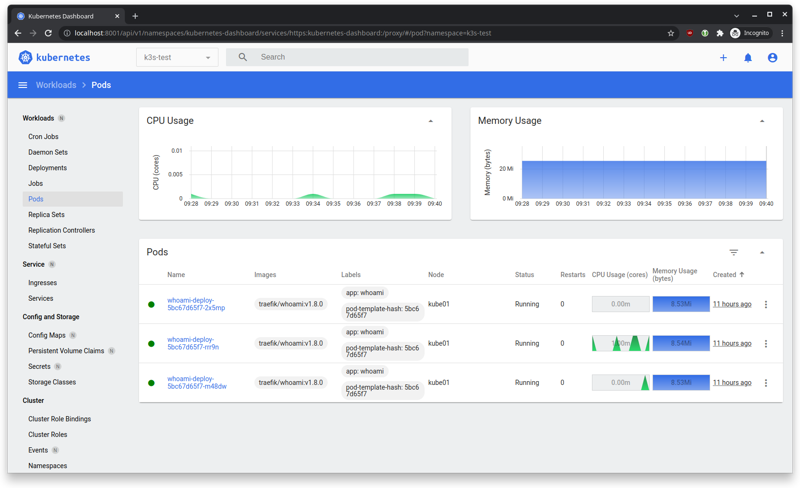 Lens is probably the next-most popular k8s GUI. It is made by Mirantis, the same people who make k0s and who recently purchased Docker Enterprise. It is open source, but also offers a paid cloud service called Lens Spaces.

Lens reads your ~/.kube/config file, so no setup or proxy is required. 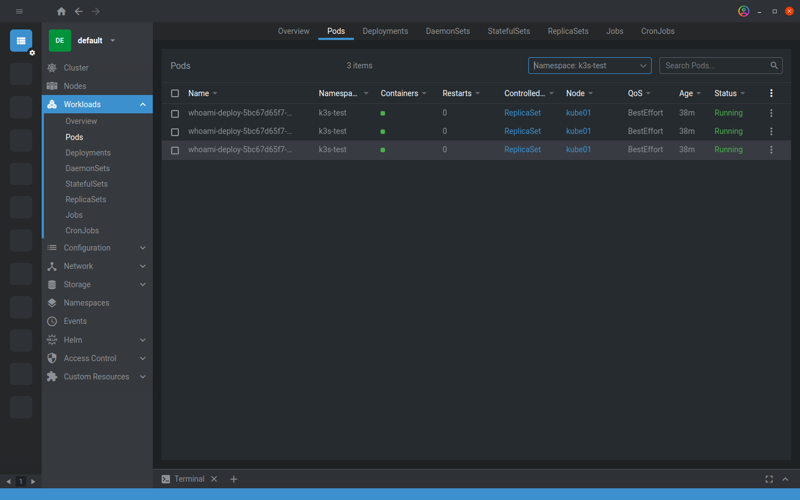 Octant is made by the good folks at VMware, as part of their Tanzu portfolio of cloud/DevOps products. It is open source and written in Go.

Installation instructions are here, but it’s available via the AUR. 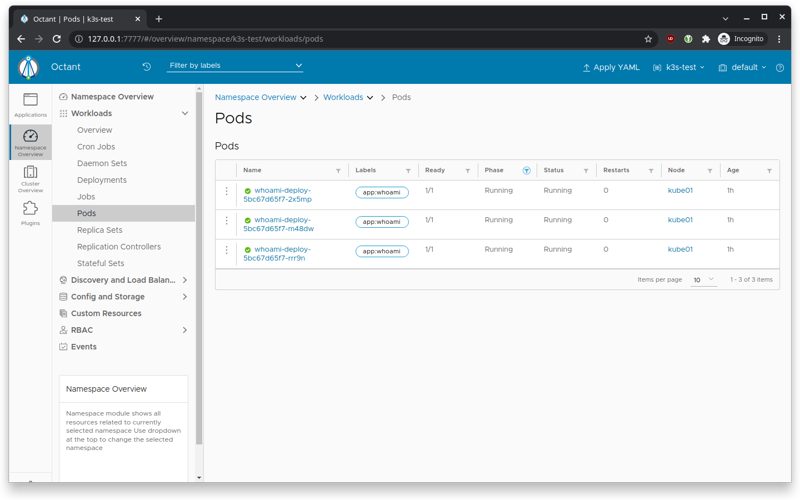 Infra App is certainly beautiful to look at, but it appears to be closed source. For free, you can connect to one cluster. The paid plan offers unlimited clusters, but is a subscription at $100/yr.

Infra App reads your ~/.kube/config file, so no setup or proxy is required. 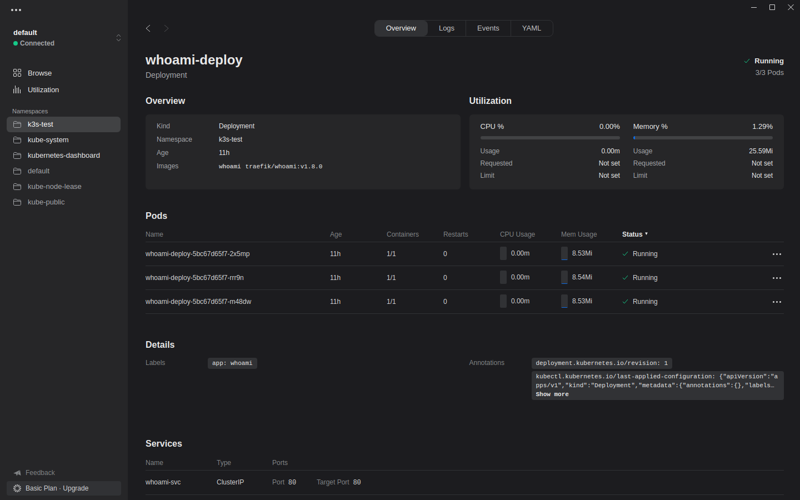 Kubenav is a stand-alone project that is open source and written in Typescript. It also appears to be Electron-based, but its claim to fame is that it offers mobile apps for iOS and Android (since it’s basically a website in a wrapper).

The version in the AUR was out of date (shock!), so I downloaded the binary from the releases page.

Kubenav reads your ~/.kube/config file, so no setup or proxy is required. 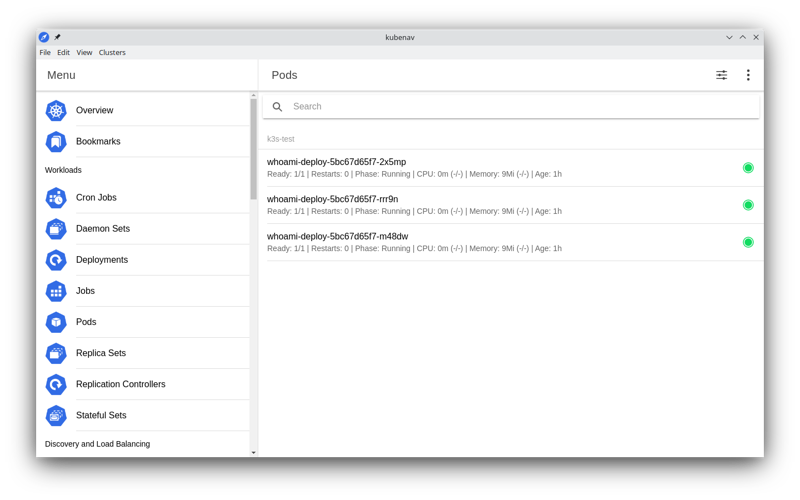 K9s is technically a terminal UI (TUI), not a GUI.

I installed K9s via the Arch repos with pacman, but K9s offers installation instructions for other operating systems on their GitHub page.

K9s reads your ~/.kube/config file, so no setup or proxy is required. 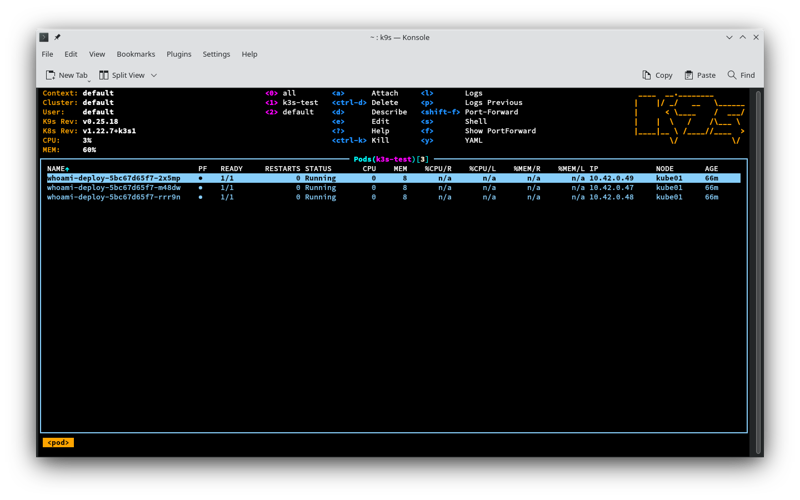 I’m going to stick with Lens, since that’s what we’re using at work, but I’m probably going to keep looking at other products as they are improved over time.