You can purchase a large SSD for way less than Valve is charging and it’s easy to replace the SSD in your Steam Deck.

I wanted to pick up a Steam Deck and was stuck on what model to purchase. The only difference between models (besides an etched glass display and a Steam Community profile bundle) is the size of the internal storage.

Every Steam Deck has a microSD card slot, so one would be tempted to purchase the 64GB Steam Deck and use a 1TB microSD card for games. While that would work, there are two small hiccups to be aware of:

Because of this, I wanted at least a 256GB SSD, but didn’t want to pay the storage premium that Valve was charging.

The internal storage in the Steam Deck is socketed using a M.2 slot, and the SSD inside is a regular 2230 drive (see below). Why not purchase the cheapest Steam Deck, open it, and replace the SSD? If you look around online, this is exactly what a ton of people have done. 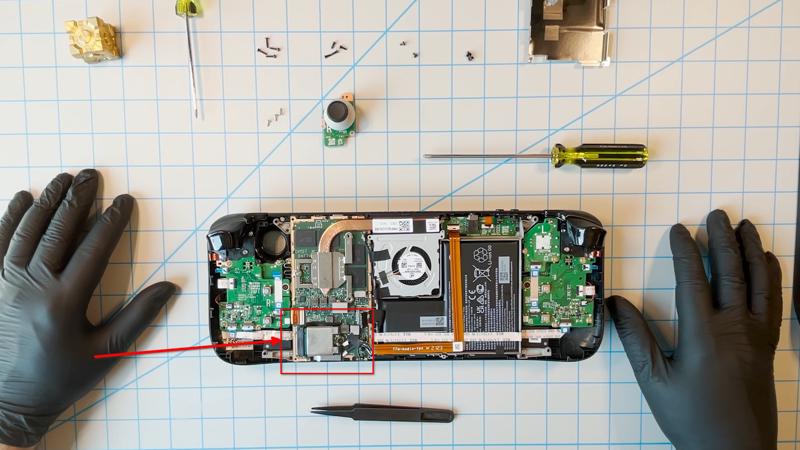 In a demo video, Valve explicitly warned users to not upgrade the SSD, lest they hurt themselves or damage the Steam Deck, but this should be an easy swap.

Every Steam Deck has a microSD card slot. This slot is nice for expandable storage, but it’s significantly slower than any other kind of internal storage (eMMC or NVMe). 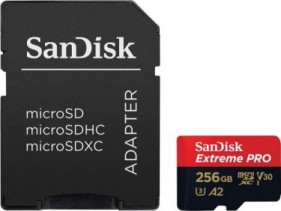 Aside from the microSD card slot, there are three base storage options:

The first option is an eMMC module on a carrier board that fits into a M.2 NVMe slot (eMMC is about half-as-fast as a SATA SSD).

The next two options are both NVMe SSDs, but I’m unable to tell if one is faster than the other (besides the larger drive being slightly faster because it’s larger). While the SSD is PCIe Gen3 on both the 256GB and 512GB models, Valve warns:

Some 256GB and 512GB models ship with a PCIe Gen 3 x2 SSD. In our testing, we did not see any impact to gaming performance between x2 and x4

To me, that says that the drives between the 256GB and 512GB models are the same, other than storage capacity.

For reference, below are some real-world examples of 64GB, 256GB, and 512GB drives found in Steam Deck hardware. Note that this is not an exhaustive list of makes/models.

Before we continue, we need a quick refresher in how electricity works. In the example below, I was always taught to circle the measurement you want, and then you’ll get the formula for the other two measurements. 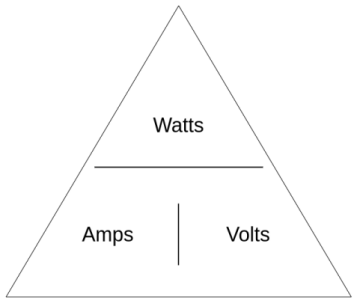 The stock Steam Deck SSDs have been specifically chosen to pull as few amps as possible. Amps are like the “rate” of electric flow per unit of time. So, in the case of a battery-powered device (like the Steam Deck), more amps equal faster battery usage (as well as more waste heat generated).

From the examples above, and through searching Reddit and Twitter, I’ve seen Valve use SSDs ranging from 1A (3.3W) to 2A (6.6W). In my search for SSDs, I was trying to keep it as close to the low-end (1A) as possible, since a higher-draw SSD would drain more battery and produce more waste heat. Also, keep in mind that a larger capacity drive has more flash chips (e.g., 1TB vs 512GB), which require more power.

This is also why Valve warns against putting 2242 SSDs into the Steam Deck, since the 2242 form-factor draws more power and produces more heat than the Steam Deck is designed to handle. Though, that doesn’t stop some people. Hell, if you like to live dangerously, you can even buy a 2280 M.2 SSD and physically cut it down to 2230, as this person did. I obviously do not recommend either of these options (neither does Valve).

Because M.2 2230 SSDs are not commonly sold to retail customers (e.g., most PCs use 2280), there are only a few retail sources, with the rest being sourced from used parts on eBay. That being said, here are the requirements for a replacement SSD:

Below are some SSDs I found in my searching. All of these are 512GB, except the Inland, which only comes in a 1TB version. I also stumbled upon a much more extensive post about replacement SSDs, so be sure to check that out for even more options.

Maybe I’m old, but I couldn’t believe how small this thing was 🤯 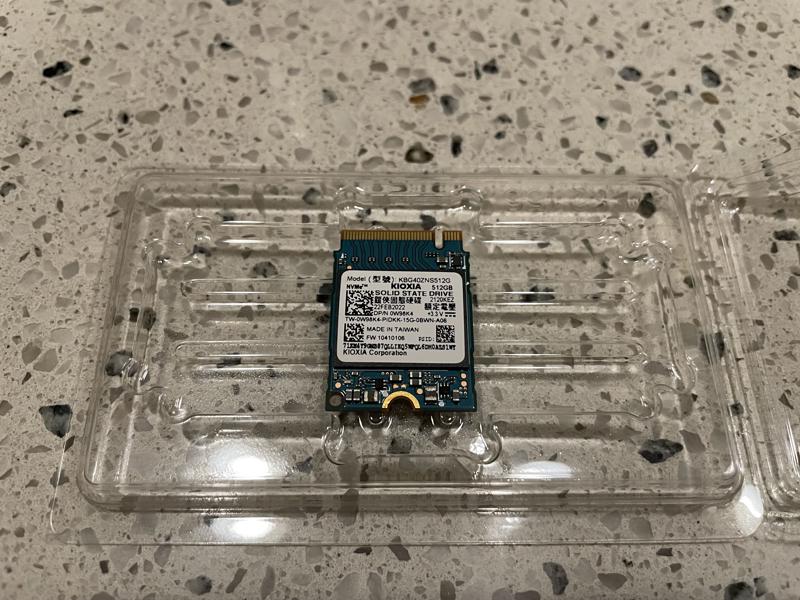 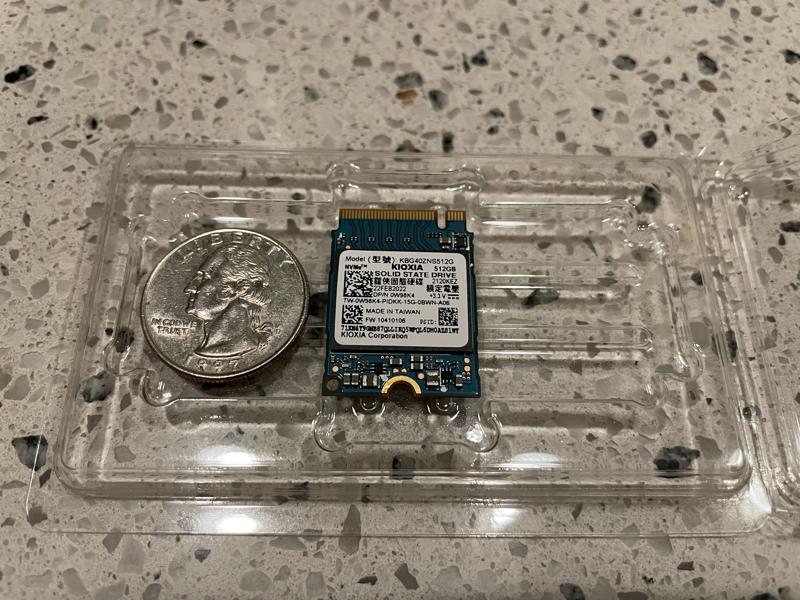 The eBay seller was XPC Technologies and true to their listing, it had less than 7 power-on-hours.

The replacement process is pretty easy if you’ve ever built a PC before.

You’ll need a few parts to get started:

I won’t rewrite iFixit’s excellent guide, but between that and Valve’s teardown video, you should have no problems doing the replacement. 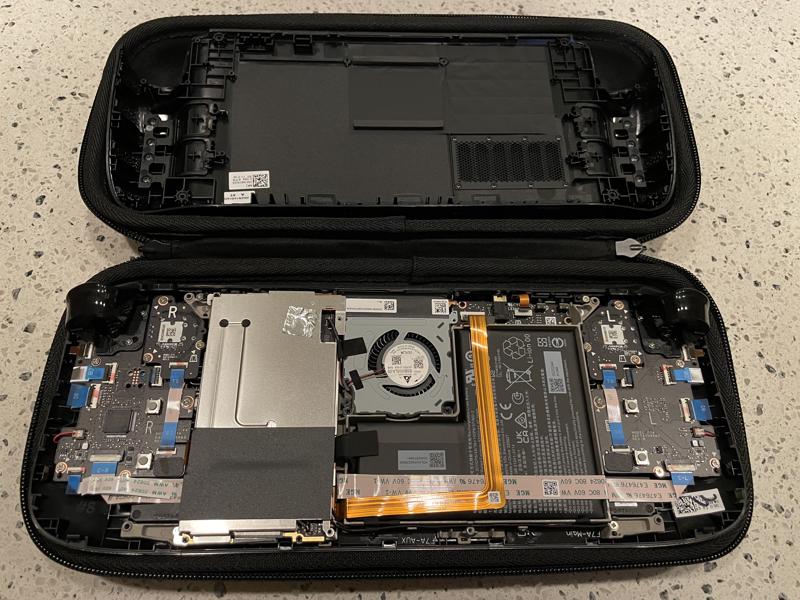 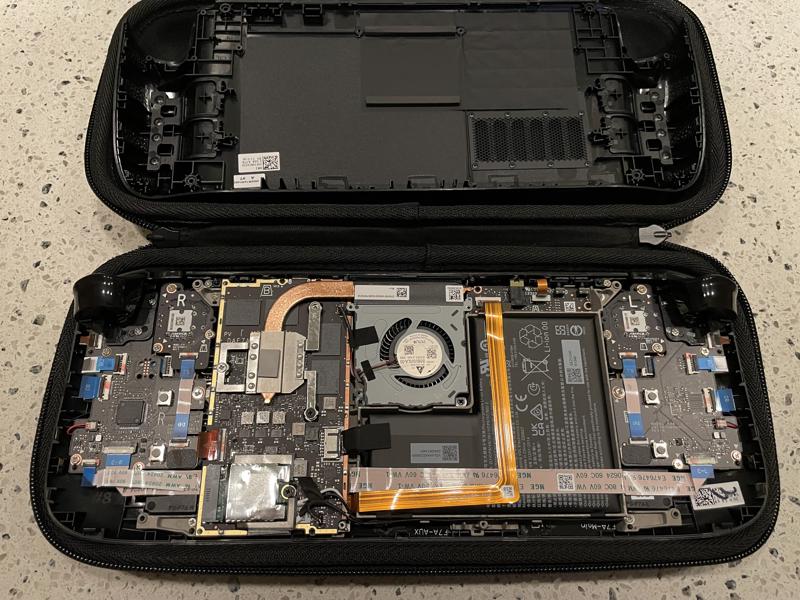 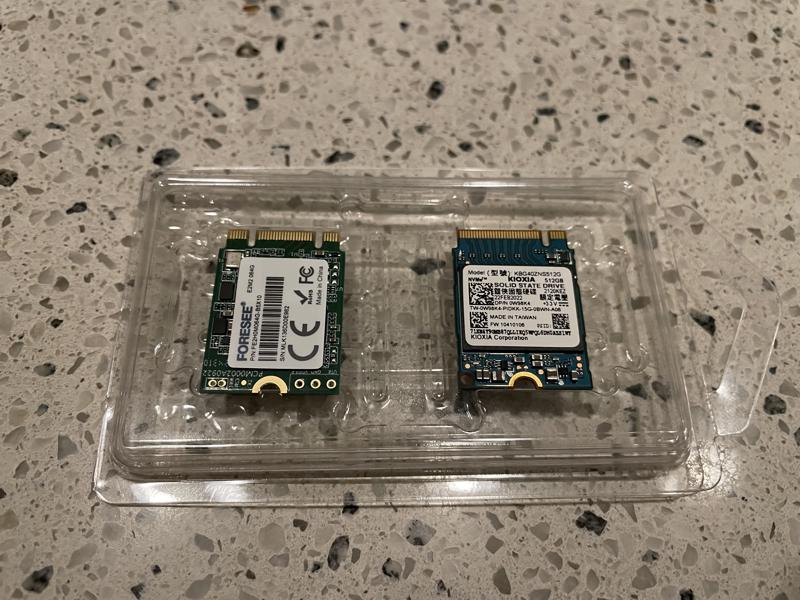 After that, you should be able to boot your Steam Deck and see the expanded storage. A couple more notes:

Here is the Steam Deck’s 64GB storage (before the upgrade) 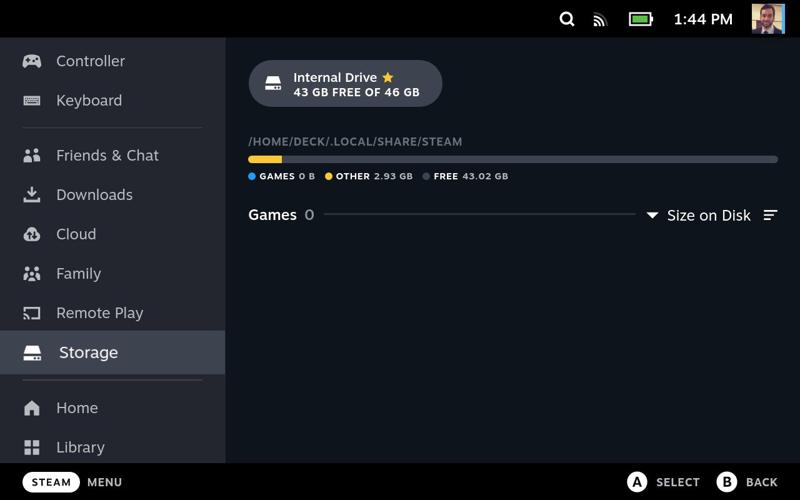 Here is the Steam Deck’s 512GB storage (after the upgrade) 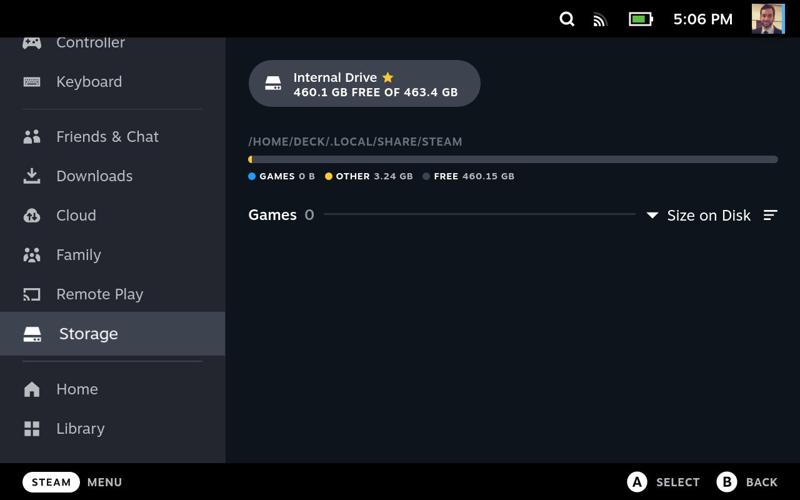 I didn’t run any before/after benchmarks on the SSDs, those are easy enough to find online. Maybe it’s confirmation bias, but the Steam Deck feels snappier in the menus and loading games.

Thanks to Lord Gaben and Valve for designing such a powerful product, but more importantly, allowing tinkerers to be able to fix and upgrade it without jumping through hoops. This is your right to repair in action.