I’m frustrated by Mozilla, but don’t see many alternative browsers that have such noble goals as Firefox.

I have a confession: I tried really hard to quit Firefox, but I can’t.

I’ve been using Firefox since the single-digit release days, and I’ve been publishing my Firefox config for five years now. In a recent experiment, I used Brave Browser exclusively for three months, but ended up moving back to Firefox. Here are my thoughts (i.e., a rant) on why I moved, why I moved back, and why I might not be done moving.

Firefox gained popularity at a time when smartphones were not a thing, Windows XP was still supported, and Internet Explorer (IE) dominated the browser market. Because IE came pre-installed on Windows, it was the browser of choice for most people. Firefox was the only alternative (unless you used a Mac, in which case, you used Safari). At its peak, Firefox was estimated to have around 30% of the global desktop browser market share (see image below) and over 50% in some markets. 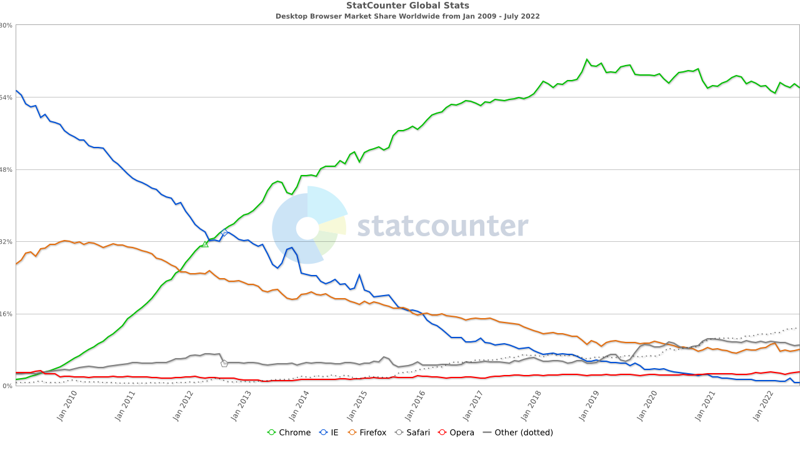 For current reference, here are the stats from July 2022. What happened?

In September 2008, Google announced Google Chrome, which exploded in popularity because:

The tragedy of the default#

Unlike its competitors, Mozilla (the company that makes Firefox) has no platform on which to advertise Firefox:

Most users can’t or won’t switch away from anything provided by default.

Before we go on, it’s important to understand how Mozilla is structured and how they make money. I’ve tried to visualize this in an image below (probably best to open it in a new tab), but will spell out some key details here.

“Mozilla” is an ambiguous term. The Mozilla Foundation, which is a 501(c)(3) non-profit, owns three for-profit companies:

The Mozilla Corporation does not accept donations from users. Of their $496m in revenue in 2020, 89% came from search deals, with only 5% coming from subscription services (e.g., Mozilla VPN or Pocket) and advertising (on the Firefox homepage).

See these documents (one, two, three) for more financial details.

Mozilla has mismanaged their money and Firefox’s development for the better part of a decade. They are clearly struggling to figure out how to make non-Google money, what to do with their current money, and where Firefox fits in.

Why I tried to quit Firefox (and why I went back)#

I recently met someone who works for Brave, and after some talking, they convinced me to give Brave a try. It had everything I needed (e.g., all of Chromium, mobile apps, plus things like built-in ad-blocking and sync support, etc…). While generally not a huge fan of cryptocurrencies, I agree with Brave that web advertising is fundamentally broken. I think Basic Attention Token (BAT), while not perfect, is a step in the right direction (if nothing else, it’s different than what we have now).

I imported my bookmarks into Brave and setup sync between my devices (I really liked the no-account sync setup). Brave was available for all of my devices, loaded pages quickly, no sites were broken, and sync always worked. Hell, I even became a verified Brave Creator. After a few months of use, I had no complaints.

However, as an open source advocate, I honestly felt guilty using Brave.

While there might be many browsers, both large and small, there are only a handful actively maintained of browser engines (the things that render the HTML/CSS into what you see on the page):

By having a huge market share, Google (who controls Blink) could create a Blink-based browser monoculture. In fact, right now, many developers don’t even test their websites and applications in anything other than Chrome. By using Firefox, I’m hoping that I’m helping to diversify browser engines and show that choice (and adherence to standards) is important.

Browsers based on other browsers#

As I mentioned, many browsers are based on Chromium. This begs the question: Why aren’t there many popular Firefox-based alternatives? I can see two reasons for this:

When Brendan Eich (the creator of Javascript and ex-Mozilla CEO), created Brave, he originally based it on Gecko. However, this proved to be too much work and Brave was later switched to Chromium. Even Microsoft abandoned EdgeHTML (their original browser engine for Edge) and switched to Chromium.

Making a browser is hard work, costs a lot of money, has high stakes, and most projects want the least resistance. If Chromium/Blink offer a better experience than Firefox/Gecko, you can’t blame projects for not basing their products on Firefox/Gecko.

I’m frustrated by Mozilla. I want Firefox to succeed, and I believe in Firefox’s goal of creating an open and accessible internet, but I don’t know how to help Firefox.

I’ve debated paying for a Mozilla VPN subscription that I won’t use, but there is no guarantee that money will go towards Firefox. I’d prefer to be able to donate to Firefox directly, like I can with Thunderbird. For now, I’m spreading the Firefox gospel where possible. Although this post was a rant about Mozilla, I’m hard on them because I love Firefox and I know they can be better stewards of the only remaining independent browser.