Put on your tinfoil hats, boys and girls! Today, we’re talking about security, encryption, and GPG!

PGP vs OpenPGP vs GPG#

Pretty Good Privacy (PGP) was a program created to encrypt/decrypt data in 1991 by Phil Zimmermann. Zimmermann formed PGP Incorporated, which was acquired serveral times and is now owned by Symantec.

Fun fact - in 1993 the US government charged Zimmerman with “munitions export without a license”. At the time, cryptography systems with keys over 40 bits were considered a weapon, and since PGP used 128 bit keys, Zimmerman was in violation of the law. However, Zimmerman was able to circumvent this by publishing the entire source code of PGP in a physical book (that could be scanned with OCR and recompiled into source code), since the export of books was protected by the First Amendment. Today, PGP is no longer considered a weapon, but still cannot be exported to a specific list of individuals/countries.

Because of PGP’s importance, Zimmermann decided that an open standard needed to be created so that others could write/use code that would interact with PGP. In 1997, Zimmermann proposed to the Internet Engineering Task Force (IEFT) the standard called OpenPGP. The current standard is RFC 4880. Today, any programs that use the OpenPGP standard (like PGP and GPG) will be cross-compatible.

GNU Privacy Guard (GnuPG or GPG), now part the GNU Project, was created by Werner Koch in 1997. It was designed to be an open source, OpenPGP compatible version of PGP. GPG became the de facto standard encryption software, powering almost all of the underlying encryption software that world and web depended on. However, since its creation, it has been maintained almost single-handedly by Koch, who relied only on donations and limited funding from the German government. In fact, Koch only earned an average of about $25k per year working full time on GPG, all while supporting a wife and daughter. In February 2015, ProPublica published an article outlining Koch’s labor of love with GPG. After the article went viral, Koch received over $137k in donations from users, $60k from the Linux Foundation, and recurring donations of $50k per year from both Facebook and Stripe. With the money, Koch was able to hire a full-time developer and continue work on GPG.

This is a very quick lesson in public key cryptography, which is used by PGP and GPG. You first generate a public and private key using a program on your computer. These keys are mathematically related, but you cannot derive one from the other. You should make your public key public (anyone can see it), but keep your private key private (only you can see it).

You can encrypt a message with either key, then decrypt it with the other. The choice of which to use depends on the scenario, as seen below.

If you want to send an encrypted message to someone, you would encrypt it using their public key. When they receive the message, it can only be decrypted by their private key.

In the example below, you can see that in order for Alice to receive a message from Bob, Bob must encrypt it using Alice’s public key. Then, only Alice can decrypt it, since she is the only one with access to her private key. 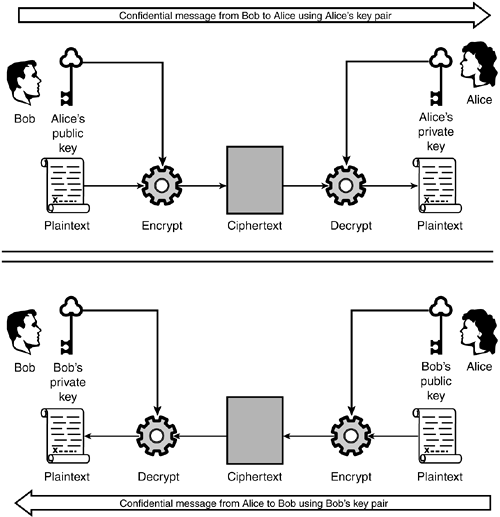 If someone wants to verify a message is coming from you, and hasn’t been tampered with, encrypt a message with your private key. 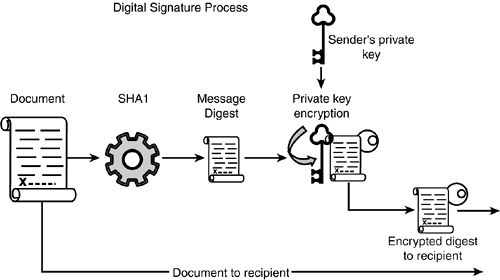 When they receive the message, it can only be decrypted by your public key. This proves you are who you say you are and that the message hasn’t been tampered with. 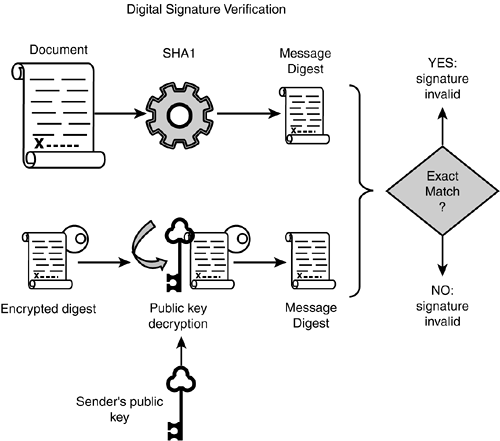 Note - In the image above, the outcome of “Exact Match?” for “Yes” should not read invalid. Thanks to commenter XiaoKe for pointing that out!

There are three main branches of GPG:

In Arch Linux, you can install GPG with the command below.

The gnupg package will also install pinentry, a collection of simple PIN or passphrase entry dialog boxes which GPG uses.

Note - In Arch Linux, the executable can be called from the command line with gpg, but some distributions will require you to use gpg2 instead.

You can replace your-key-id in this document with your short key ID, long key ID, fingerprint, or email address. GPG is pretty flexible in allowing this, and I usually use my email for this option.

You may also see --armor in various GPG commands. Normally, GPG output is binary and can be corrupted by other programs (e.g., email clients, word processors, etc..). To circumvent this, you can use --armor to create ASCII-armor encrypted output that can be safely used by other programs.

Using GPG, generate a key using the command below.

Alternately, you can use the extended version of --gen-key, which uses a wizard to guide you through the process, offering non-standard options. This is the option I’ll be using.

Second, specify the key size. The default is 2048 bits, but I’m going to specify 4096 bits. There is some discussion about whether anything larger than 2048 bits is more secure.

Third, choose an expiration date. I’m going to choose a key that does not expire.

Now, GPG will construct your identity. Enter your full name, email address, and a comment (optional). Verify your information, then create a password to protect your keys. It goes without saying, but PROTECT THIS PASSWORD AND KEYFILES!

I highly recommend you generate an revocation certificate. This is used in the event that your key is lost, stolen, or somehow compromised. This should be done in advance, do not wait until after your key has been compromised.

This key should be protected as well as your GPG keys, since anyone who has access to key can essentially render your key obsolete (then impersonate you with a new key). Some users recommend printing this key as a backup fail-safe, since it is relatively short, and can be manually retyped if needed.

A key fingerprint is a 40 character, SHA-1 hashed version of your key. This is used to quickly verify a key, since it’s quicker than checking the entire key (which could be thousands of characters long). You can find your key fingerprint with the command below.

Having a key fingerprint doesn’t mean anything by itself, but it does help to identify yourself. For example, I can publish my public key and fingerprint on this blog, but how can you trust that its really my key? You may know me personally, you may have watched me publish it, but what if you don’t?

Take the following scenario as an example. You could import my public key (from a keyserver or a file), generate a fingerprint of that key, then either call/email/IM/meet me and have me read back my fingerprint, generated from my private key. If the fingerprint you generated is the same as the fingerprint I’m reading you, then you can at least assume I have control of the key (whether or not I acquired it genuinely is yet to be determined).

A public key is no good if no one knows about it. You should try to publish your public key and fingerprint anywhere possible, including a domain/site you control (blog, Facebook, Twitter etc…).

Use the command below to export your public key.

When published, your key should look something like this (below is my public key). The --BEGIN-- and --END-- stanzas are part of the key, do not forget them!

Start by finding the 8 character hexadecimal ID of your key, using the command below. The hex-id will be the same as the last 8 characters of your key fingerprint as well.

Now, upload your key to a keyserver. You’ll need to use your hex-id, not your your-key-id, as we’ve been using in this guide.

Note - The major keyservers mirror one another, so once you upload to one, they’ll eventually all be in sync.

To trust other users, you’ll need to import their keys.

Use the command below to import a key from a file.

Before we being, keep in mind that importing a key from a keyserver does not guarantee the key belongs to the user (e.g., look at all the entries for Richard Stallman).

First, start by searching for a key on a keyserver.

Then, import the key using the command below.

A note on short key IDs#

When publishing your GPG information, you typically publish the entire public key, as well as the fingerprint, long key ID, and short key ID.

Before we discuss signing keys, we need to understand the web of trust (WOT). The WOT is a concept used to establish the authenticity of a public key with an individual owner. It is the decentralized version of the centralized public key infrastructure (PKI) commonly used by certificate authorities when creating SSL certificates.

Signing a key is your way of telling the world that you believe the key belongs to the name and email contained inside it.

First, you’ll have to import the key of the other user (either manually or from a keyserver). Next, you’ll need to sign their key.

After you’ve signed their key, you should export it.

Send them the output, and have them import it into GPG on their machine. They can then publish their updated key on a keyserver to show the world that you trust their key.

This is how the web is created and expands. If someone trusts you, and they see you’ve trusted this user, they will be more likely to trust that user as well. The more users that trust each other’s keys, the more of a “web of trust” that is created.

The WOT wouldn’t be very useful, however, if the web wasn’t large. Imagine you have a key pair, but don’t know anyone else who uses GPG. Who would sign your keys? Fortunately, events called key signing parties exist where users gather to verify each other’s identities and exchange fingerprints of public keys printed on paper (users are often warned not to bring a computer). After the party, users sign the keys they received, upload them to keyservers, then download their newly signed public key as well. A few resources on the etiquette and procedures of key signing parties are located here, here, and here. Two site for generating paper fingerprint slips are located here and here.

To manually encrypt a message, start by saving the message to a file. Then, encrypt the file for email, using the command below.

The resulting file will be named filename.gpg.

Use the command below to decrypt a file/message.

Updates all keys downloaded from a keyserver.

As you have learned by now, GPG is difficult and cumbersome to use on the command line. However, there are a number of GUI tools that make using GPG a little easier.

The Free Software Foundation has a great guide to configuring Enigmail on Thunderbird. I won’t bother going over the same setup here.

For webmail, Mailvelope is the most popular (still actively developed) way to encrypt email. It offers plugins for Firefox and Chrome, and integrates with Gmail, Yahoo! Mail, Outlook.com, and more. It can also create/manage/delete/import/export GPG keys, without GPG needing to be installed (it relies on OpenPGP.js).

Again, Mailvelope offers a great guide to installation and configuration, so I won’t bother repeating it here.

Encrypting files on your local machine is made easier with the tools below.

Let me know how you use GPG!