Hey! Listen! This post is part of a series on using your own router with Verizon FiOS. Check them all out!

At the new house, we have Verizon FiOS. If you’re not familiar, FiOS is a FTTP (Fiber-to-the-Premises) multimedia service that offers phone service, internet, and TV. If fiber is strung in your area, Verizon taps into the fiber line on the telephone pole and runs it to your house. Verizon will then install a box on your property called the Optical Network Terminal (ONT), that converts the fiber signal into a copper signal.

Each ONT has multiple outputs and is capable of delivering multiple phone lines, internet data, and TV data. For the internet signal, typically the Verizon technician configures the ONT to have coaxial output, because most homes are already wired for coaxial from the demarc to various rooms in the house. 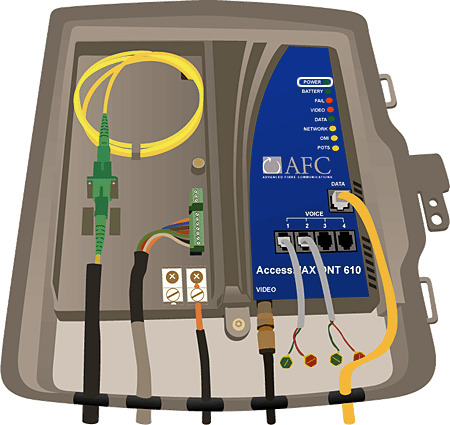 Verizon also provides an internet router that connects to the ONT. The FiOS router (typically an ActionTec MI424WR 100Mbps or 1Gbps) has a coaxial/ethernet inputs and acts as an all-in-one MoCA bridge, router, switch, and wireless access-point.

In the typical setup (shown below) the coaxial cable coming from the ONT is split in two: one run for the FiOS router, and one run for the TV set-top boxes. The FiOS router takes input from coaxial and converts it to internet signal via the MoCA (Multimedia over Coax Alliance) bridge. If you have FiOS TV, you must have the FiOS router on your network (for functions like video-on-demand, the guide, etc…).

I’m not using FiOS for TV or phone service (I’m internet-only). My current setup (with the FiOS router) is shown below.

However, if you’re an internet-only FiOS customer (like me), you don’t need to use the FiOS router, since the set-top boxes aren’t being used. I’d rather replace it with my own OpenWrt router that is more nerd-oriented and packs more features. Ideally, what I’d like to have is below.

This setup has the following benefits:

Almost any standard router will work here, as long as it acts as a router (i.e., it routes packets between networks) and a firewall (i.e., it inspects packets based on rules). If you’re an average user, most devices off the shelf from BestBuy or Amazon will get the job done just fine.

Personally, I recommend any router manufacturer that provides consistent updates. Asus is the real star here. All of their routers run the same basic OS, so when they create an update, it typically gets built for each model, since they’re based on the same platform. Because of this, Asus provides updates to their routers once every couple weeks. In addition, the excellent Merlin firmware is based on the standard Asus firmware. TP-Link and Netgear aren’t bad either, but only expect the newest devices to receive consistent updates.

I’d recommend avoiding a router by a manufacturer that has a poor history of providing updates. Unfortunately, this list is probably too exhaustive to list every manufacturer.

Also, you do not want a router that is advertised as a “DOCSIS modem” or a router that comes with a coaxial port instead of an ethernet WAN port. An example of what you don’t want is the Netgear C7000, because it is a modem, and lacks a WAN port. 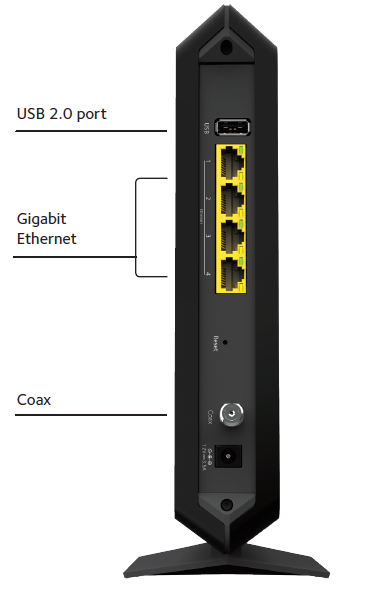 Do this at your own risk, I’m not responsible for anything you break :)

In my case, this was a relatively short run. The ONT is in the unfinished basement and the router sits directly above it on the TV stand. There was already a hole drilled in the floor from a previous coaxial run, so I chose to cut the connectors off a Cat6 patch cable, run the cable through the floor, and re-crimp new connectors. If you’re curious, below are the parts/tools I used.

I used the T568B standard (shown below) to terminate the cable. 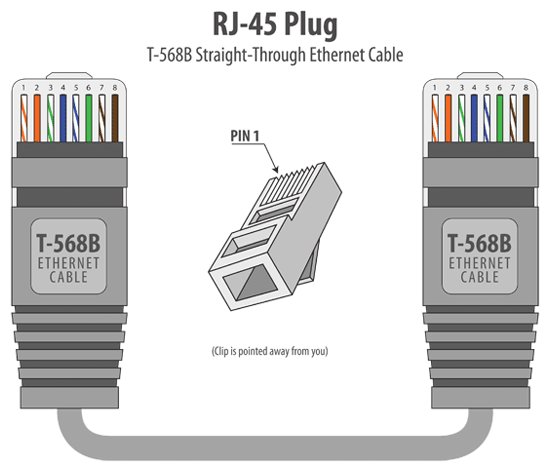 If you don’t know how to make Cat6 cables, this video below is incredibly helpful.

I tested my cable with a cable tester (to verify all four pairs were punched down correctly) and then tested it between my laptop and the FiOS router. 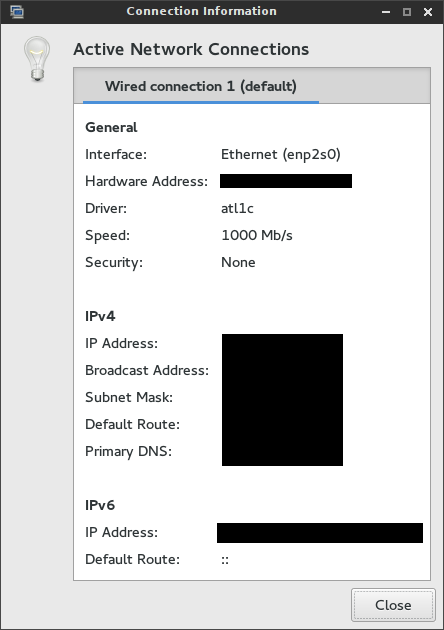 Disclaimer - Do not open the Verizon side of the ONT, as it’s their property. While you’re at it, don’t relocate or alter the ONT in any way, shape, or form. IANAL, but you will most definitely void any warranty or service agreement you had. 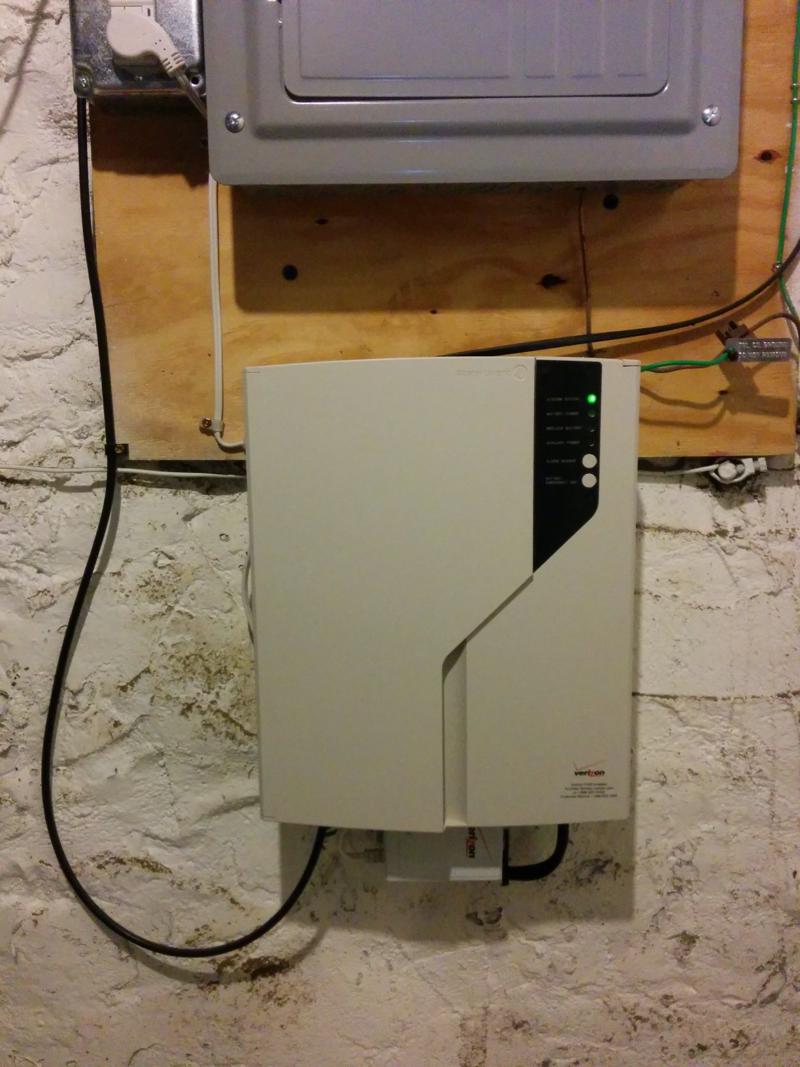 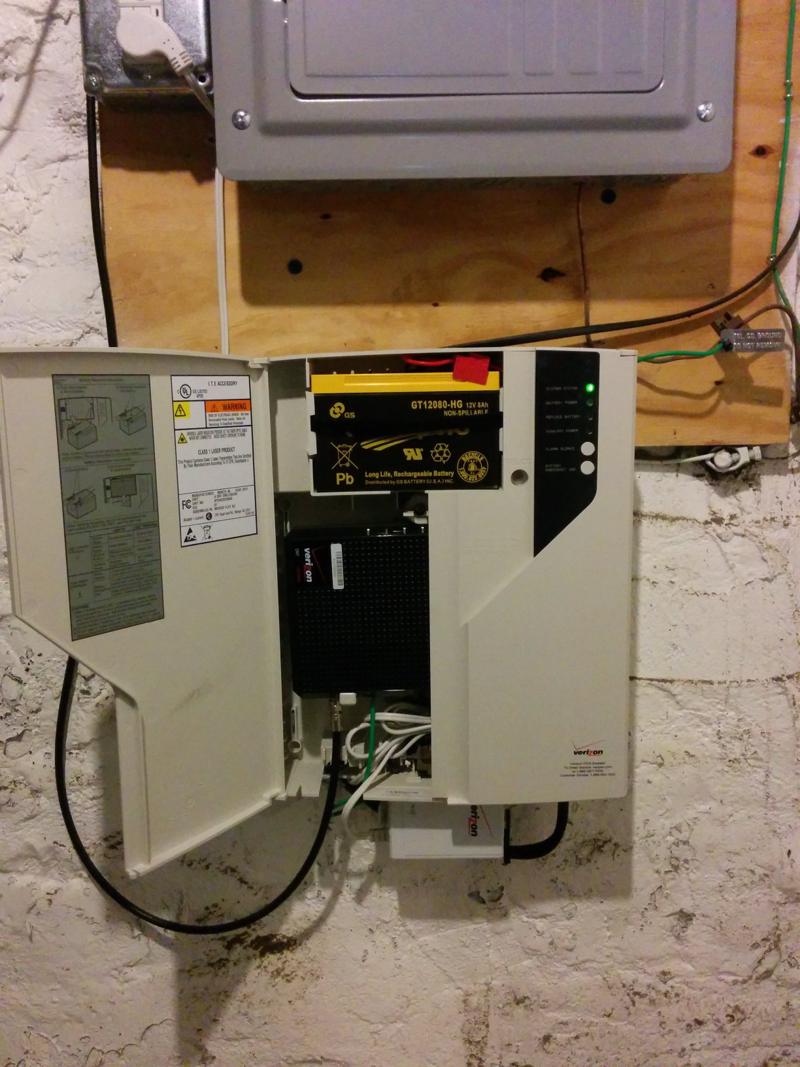 On the side accessible by the customer, you should see a standard RJ-45 jack (hard to see, but it’s on the right). 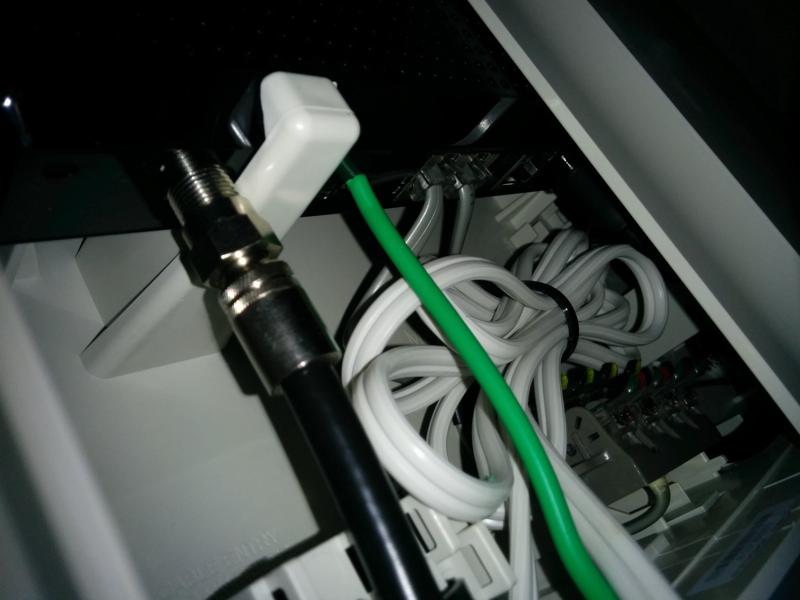 Plug your newly-made ethernet cable into the ONT. 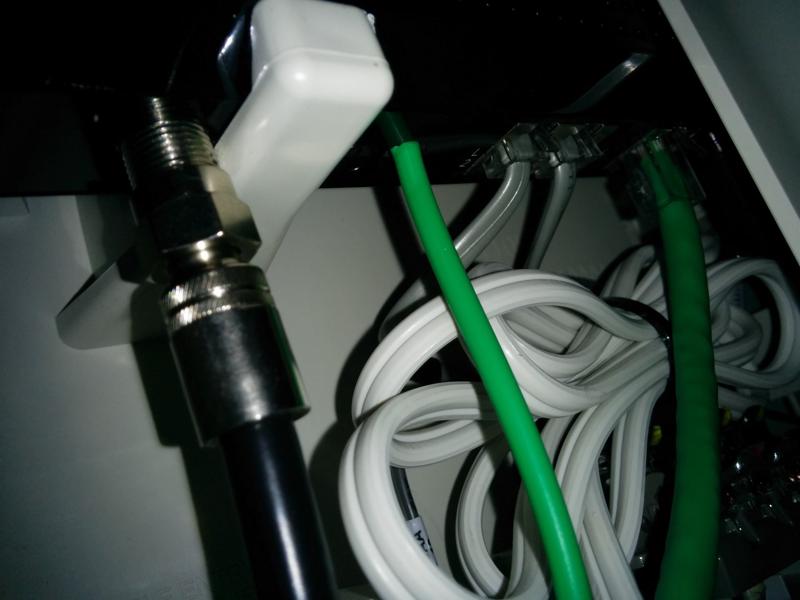 In this step, you want to go through and setup your new router before you plug it into the network. Setup your username/password, WiFi settings, DHCP ranges, etc… so that you can cutover to the new router quickly.

In my case, I’m going to be using OpenWrt on a TP-Link Archer C7. I’ve used OpenWrt in the past on a TP-Link MR-3020 and wanted to try it on a proper router. The Archer C7 has 802.11a/b/g/n/ac and is dual-band capable at 2.4GHz and 5GHz. It has OpenWrt support, as well as DD-WRT support. I plan on using the router to host an OpenVPN server, as well as a dynamic DNS updater. If you’d like, you can read more on that setup, here.

We need to start by breaking the DHCP lease on the FiOS router. To do this, login to the FiOS router via the web interface (most likely, the address will be 192.168.1.1 and the username/password will be on a sticker on the router). Click on the My Network option at the top of the screen, on the left side click on Network Connections, click on Broadband Connection (Ethernet/Coax), then click on Settings at the bottom of the page. Look for the DHCP Lease option in the list, click the Release button next to it, then scroll down to the bottom and click Apply. As soon as the settings are applied, immediately unplug the power from the FiOS router so it doesn’t request a new DHCP lease.

Call FiOS support at 1-888-553-1555. Remember what your mother taught you: use your manners! The Verizon technician doesn’t have to do this for you and will be doing you a favor. Ask customer support to switch the ONT from coaxial output to ethernet output. If they give you a hard time about doing it remotely, tell them that you want to use your own router, an ethernet cable is already run, and you don’t need a technician to come out. You may even need to ask for a supervisor or level-two support technician. Expect to spend about 30-45 minutes on the phone.

The support technician just did you a huge favor. Take their survey after the call and give them 5-stars.

There are various models of ONTs out there.

A commenter was nice enough to send me a picture of his ONT (below) to show you the differences (thanks, Larry!). 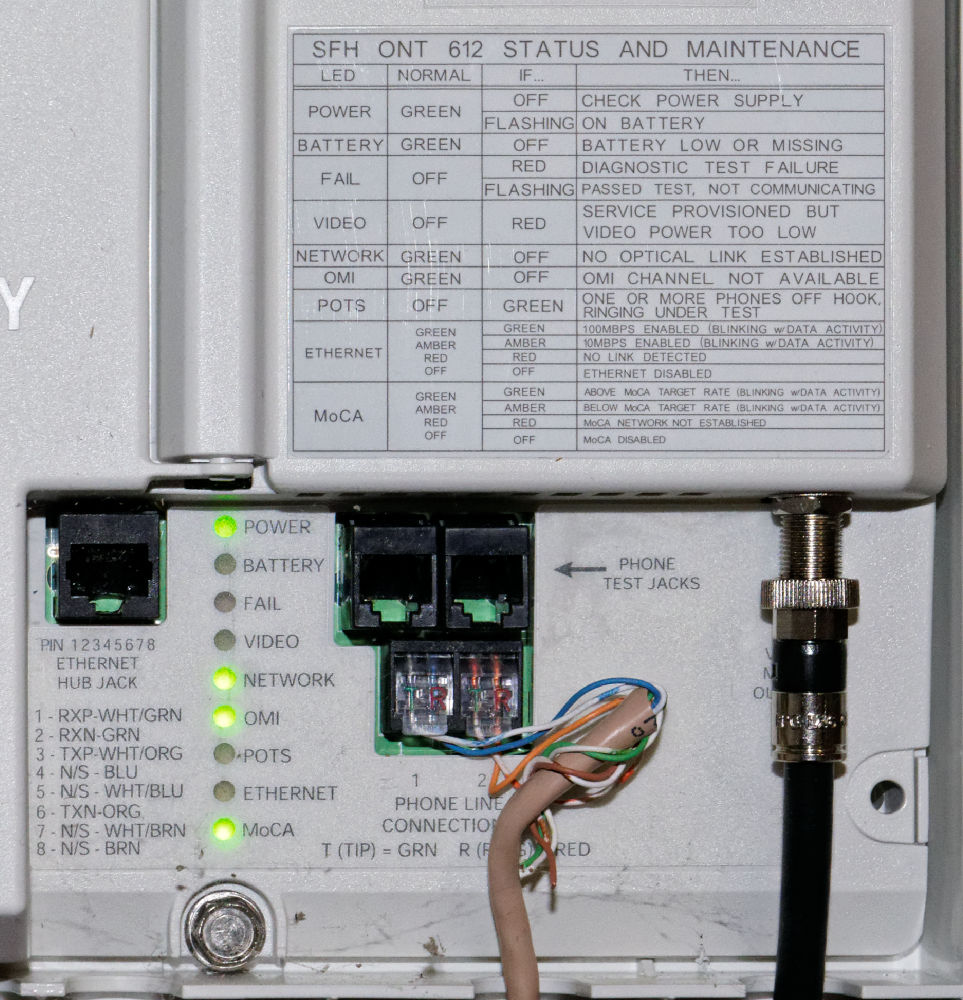 Another commenter submitted a picture of his ONT (thanks, Brian!). 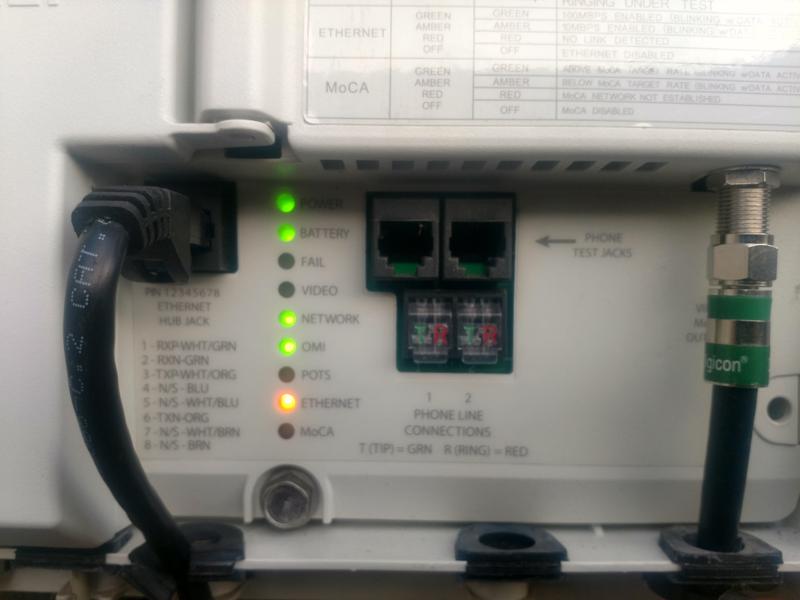 I used to recommend cloning the MAC address of your FiOS router onto your new router. However, one commenter, Jeremy, had a pretty terrible time with this, and actually had his service cancelled. Instead, I recommend using your router with it’s true MAC address. This will most likey involve a call to Verizon, but it’s worth a few minutes on the phone.

Did you switch the FiOS router out for your own? If so, let me know how it went!